> The Seven Sovereigns
A criminal organization in Paradon led by seven spell-casters who seek to amass fortune and power. They prefer to stay secret and rule the nation of Paradon from the shadows. Their symbol is a seven-pointed star. 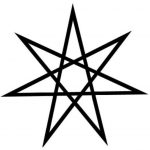 First and foremost, the Sovereigns seek to hold on to the tremendous amounts of fortune and power they already have, and the dragon Cognail, invading usurper of neighboring kingdom Sibril, is a major threat to that. They are hoping to thwart any of Cognail’s attempts to seize control of Paradon. Turns out he has a weakness: halflings. Specifically, the descendants of a legendary halfling clan (‘dardai’), of dragon tamers from old Axla, the halfling homeland, where the dragon himself hails from. He both hates and fears those of this clan, for they ran him out of Axla, and it’s said that, even now, centuries later, he will reel at the presence of one from that lineage. He can smell the offending blood in their veins.  The halfling clan, called the Dardai Derulade, used the heraldry of a thistle flower, and marked their anti-draconic weaponry and magic items with it.  The Seven began amassing as much of the thistle-marked paraphernalia as they could, a pre-emptive defense measure, but found that the clan’s magic was inaccessible, locked behind unknown Axlan command words. The Derulade, it turns out, were possessive of their powers.  In their research, the Sovereigns also chanced upon a secret weapon they could use to really hit Cognail where it hurts.  An ancient Axlan oracle once predicted the return of a heroic figure called the Shepherd Prince. The legend tells of a halfling of modest beginnings, one born “under the thistle”, who will rise up and defeat a terrible and mighty foe (generally accepted to be a dragon) and bring glory to the homeland. Cognail is surely well aware of the prophecy and dreads its fruition.  So a plan has been devised to exploit his fear and weakness.  They found the Shepherd Prince (Tumn Thistlebottom) and hope to prepare him for his fulfillment of the prophecy and the end of the dragon threat.

> The Underworld Overseers (U.O.)
Special military group controlled by the Seven Sovereigns with a contract from the Crown, ostensibly charged to guard over entrances to the Underworld in order to protect local villagers from the threat of emerging monsters. In reality, they’re corrupt and extort innocent people.

> The Mystic Order of the Wick and the Flame (aka The Wick)
A secret society of spellcasters sworn to do what they can to stop evil magic users. And since the Seven Sovereigns are easily characterized as evil magic users, the Wick acts as their watchdog.

You only know about four of them:

> The Purity
Order of famous celebrity knights devoted to the goddess Calydo;  individually called the Pure. their deeds are broadcasted widely in popular song by an order of bards called the Swains.

> Nightwatchers (aka The Order of the Wounded Eye)
A feared and secretive elite investigative force of the Temple of Calydo that focuses on monitoring dangerous waywards (chaos cults). They wear magic eye-patches that let them see exactly what occurred in a studied area during the past day

> Raismonts Academy of the Arcane

> Sibril
The island nation to the north is now under the control of the dragon Cognail. Its symbol is a clenched fist holding lightning bolts above the Draconic phrase: Alok wa fin Mok’naar Suleyk, which translates to “Ascend to the Highest Power”. 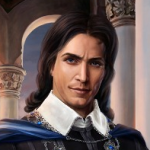 > The Unkindness
A collective of evil ravens from the Forest of Arsel; they were originally allies to the Seven Sovereigns via their principal patron Gleaming, but after his apparent death, the two groups went separate ways. They are apparently working for Cognail now, as one of them Unkindness orchestrated an attempt to get the Bloodboat Jewel for the dragon.  They were also present by Gleaming’s side at the infernal auction and apparently contributed the severed hand of their old ally Green Maggs as one of the items up for bid. 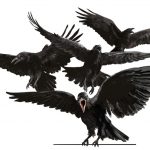 > Kenku
This race of crow-people live in their own settlement within the the Ethereal Plane super-imposed over Farglad called the City Unfair, under the rulership of Gleaming, who they think created them out of actual ravens and crows and bestowed upon them the power to plane-shift.

> The Eye-in-the-Hole
Farglad’s thriving thieves’ guild, owned and operated under the leadership of the Seven Sovereigns.

> Druids
Wildly misunderstood, Paradonians think they are nothing but crazy wild anarchists in the wilderness. They are blamed for a lot of unexplained evildoing in rural areas. A popular scapegoat, they have been persecuted into near extinction on this side of the world.  You’ve met a couple and they seemed nice enough.

> Caolaubists (aka “Chaos Cult)
These evil cultists worship the mad god Caolaub. You’ve broken up one of their hideouts and revealed their leader is none other than famous Paradonian playwright Gotwinus – only it doesn’t look like word has gotten out about that. 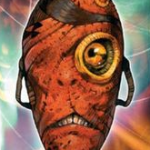 > Vordritists
An order of scholars and sages in Farglad that’s notoriously guarded and greedy. Only the city’s richest can usually afford their services as they hoard their knowledge like gold. Rumor has it they need all the money just to pay the Eye-in-the-Hole (city’s thieves’ guild) not to steal from them and provide extra protection.

> Devotees of Mother-Redeemer
You’ve never heard of this religion, but the ghost of Nana, Daisy’s grandmother, mentioned that folks of this spiritual persuasion helped her and her family escape Axla.

> Tuista Durista (aka Twisters)
Elven desert ninjas that appear and fight for you when you throw down a special “Twister-stone”. Not much is known about them, except that they are an unsavory society of elven assassins that one can “subscribe” to, somehow. The practice is considered the worst sort of dark magic, and is unfortunate for both the throwers of the stones, who must pay dearly for the service, and the tragic beings that get birthed into being to do battle at their bidding.  Nim used two of them to fight two barbed devils at the infernal auction.

> Luthans
A race of obsidian-rock skinned simians from the star Lutha. They worship a form of the goddess Calydo. A small group of them was commanded to travel to this plane for some reason they do not know. Nowadays,they just hang out feeling sad in Farglad, where they have become unwitting local sensations.

> Ozen
A group of mysterious oracles that wield starknives. 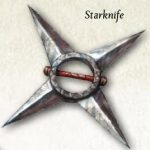 > Duriguin (aka The Sower, unknown race) – Mysterious parasitic entity that infected a barbarian tribe to make them build vast tomb cities in a particular way. The barbarian queen’s skeleton had a strange black jewel in her skull that Cognail wants. Nim has been receiving horrifying dire visions about Duriguin for quite some time. One vision seemed to indicate how to hinder it by finding the Tree of the Dead.

> The Rectoress (halfling) – Not much is known about her, but you got to see her in action with her exotic Axlan attire and cool, twirling magic fighting fan.  The Sovereigns have her acting as Tumn’s mentor – tutoring him in the ways of the Shepherd Prince to fulfill the prophecy.

> Tumn Thistlebottom (aka Trample Underfoot) (halfling) – Daisy’s brother is just a not terribly bright shepherd kid from a small halfling village. He’s in over his head.

> Ozen Lu (Luthan, deceased) – He traveled with the other Luthans to this plane, only to be killed by the Underworld Overseers who mistook him for a monster.  He hoped to see Nim, who he may or may not be in love with, and warn her about something.  His starknife was stolen by the kenku, purchased at the infernal auction by a mysterious robed figure, but then purloined by Dovienya and given to Nim – a fact which would likely make Lu very happy.

> Gotwinus (human) – Paradon’s famous playwright who turned out to be Moumalid, the leader of the Caolaubist cultists.  He was largely motivated to cure his creative block, summoning a demon to write his plays for him in exchange for soul gems that his fox necklace regurgitated.  He found out about the Xan-Hyrkanic Codex at the auction and received an invitation to attend, but Balek Broadwall intercepted the invite. An enraged Gotwinus seized a kenku to interrogate it to learn how to get in, but you invaded his hide-out, killed all his cultists, freed his prisoners, and destroyed his unholy altar. Then you unmasked him, revealing his true identity, and put him into the custody of Sa’ramae. And he woulda gotten away with it  if it wasn’t for you meddlin’ kids!

> Green Maggs (unknown race, deceased) – Turned to stone for centuries, she was a legendary enemy of the forest elves of Arsel and an ally to the Unkindness. Trimphid needed safe passage from the ravens across the forest so he figured out how to restore her to flesh.  Then you came along and killed her in her pond before she even had a chance to accumulate her former power.  Her severed hand is still still at large, however.

> Doumen (human) –  You helped free this druid from the Smidge villagers after they thought he was a werewolf. Whereabouts unknown.

> Trimphid Chrygora (human, deceased) – A wizard nobleman from Gridea who had an estate near the village of Smidge. Power hungry and evil, he sought Gleaming’s spot in the Sovereigns. To test him out, the Sovereigns put him in command of the Underworld Overseers by his estate. Trimphid directed them to seek out stuff with Daisy’s family symbol at Willowdale. When they returned with Tumn the Shepherd Prince himself, he decided to deliver him directly to Furik, hoping to improve his chances at getting asked to join the Sovereigns. His efforts failed, apparently, and a dejected and spiteful Trimphid decided to get his revenge. He kidnapped Tumn away from the Sovereigns and attempted to sell him to the highest bidder at Gleaming’s auctions. This was thwarted though by the Unsworn, with the help of Mouse. And now Trimphid’s dead.

> Anafrid Pugis (human): Trimphid’s housekeeper who wanted revenge against her wizard master. She let you into his mansion and then took off wearing a magic cowl. Whereabouts unknown.

> Mouse (dweomercat) – A powerful plane-shifting creature made out of spells, he was held captive in a cage as a small cub by Trimphid Chrygora for years.  Nim and the Unsworn freed him after their raid of the wizard’s manse for which he is very grateful. He has been seeking his revenge on Trimphid and finally found an opportunity to take him out with your help in the Ethereal Plane during the infernal auction. 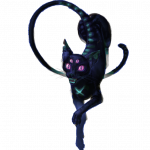