You head south across the plains away from the Blink Dogs’ camp, towards the edge of the Harebuck forest. Dovienya knows of a venerational wayside shrine to his goddess Brega en route. A tucked away little structure off the main road houses a roadstone with Brega’s symbol carved on the flat top. In the back is a secret door to a carved-out chamber for Bregans to leave info and extra pairs of boots. The space acts a rest stop for devotees and in-the-know travelers.

Dovineya signs the guest book, leaves a pair of boots like a good Bregan, and finds a nice map of the eastern marshes to show everyone. He reads valuable news and gossip. He learns that the best way for the Unsworn to travel is to avoid the armies altogether and instead venture across the marshes further southward by crossing a large stretch of gnome-inhabited lands known as the Hudbud. He learns a famous gnome explorer named Moxie Coppercore is currently staying at the Everwell Inn in Wobbly Rock in the Hudbud. A world traveler, there’s a good chance she’ll be able to point out where Gwendols Gate is located on map within the Brutal Mountains.

Dovienya touches the shrine’s roadstone in communion with his deity and receives Brega’s luck blessing. He also experiences a vision where he converses with the goddess herself at the crossroads.  Dovienya can tell that Brega is worried. There’s something coming, she warns him, but she can’t quite figure out what. 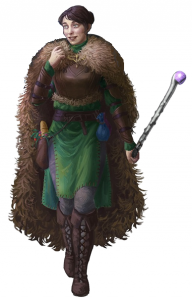 “I have worked at making peace with the Tharybians – well, Calydo and Kyon anyway – not Om-Striom, of course.” the goddess explains. “I want us on the same team so we can face this threat. There are those that plot against the gods. They did it before and they’re still doing it. I know you’ve read about my ‘adventures’ [DM Note: See: Xan-Hyrkanic Codex], restoring life to the world after Siglain’s Spell [aka the opprobrious axiom]. What I did was so secret, not even my priesthood knows about it. Maybe you, Dovienya, should be the one to write a book about what I did some day.”

At this, a shocked Dovienya can’t help but react visibly at the extraordinary honor.

The goddess continues. “One thing that has become clear to me is you need to safeguard the Spell and find a way to reverse it: grow back the tree, bring back Siglain. There’s something of Siglain’s that Caolaub still covets – the Om-Striomites have it. They think it’s Moonbane, the weapon he used to blind Calydo. If you can get that, it will help, I think.”

Brega says goodbye, Dovienya makes a mental note to look out for this Moonbane, then he awakes from his divine trance.

After the visit to the shrine, the Unsworn continue on their way down to the Hudbud. You pass through the humans’ town of Pew but decide not to linger.  Their Temple to Om-Striom was burned down long ago by Trig, and the people don’t hide their disapproving looks at strangers, particularly diminutively-sized ones.

For a brief time, you join up with a mysterious lone traveler, Lander, an elf bard – who Dovienya deduces is secretly an incognito Orifluran, a wanted Sibrillian. 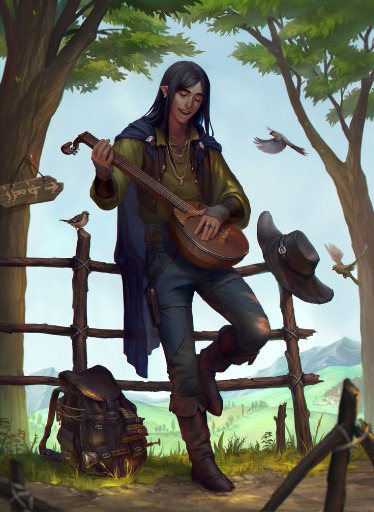 Eventually, you arrive at the gnomish town of Wobbly Rock, the one untrapped place in the Hudbud that Big Folk are allowed to visit. The Huddlestoop Buddingbed, or “Hudbud” for short, is also called the Traplands or the Gnomelands. The whole countryside of gnome residences stretching east towards the marshes is laden with cunning traps for miles and miles to keep invaders out. 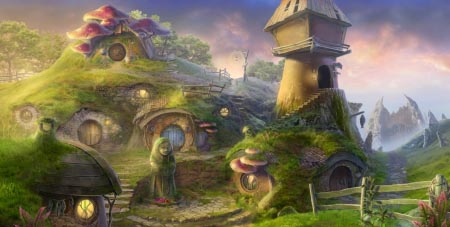 Wobbly Rock is famous as a tourist attraction for two things:

1) The Legendary Apothecary – a curiosity shop and bookstore run by Zymbal the Razulantan gnome wizard. It’s here that Dovienya gets a ‘Book of Lodope’ for Tumn, Nim gets books on Gwendol and Jerum, and Trig gets a book on… well, I’d rather not say (*DM blushes*).

2) The Everwell Inn – a spacious, luxurious inn owned and operated by the elf/human Tranchant family of Berengerius and Nylaylee Tranchant and their eleven half-elf children.

Holding court in the common room of the Inn you find the celebrity Moxamazia Coppercore! She’s an intrepid aristocratic adventurer/inventor, and to no surprise, she’s surrounded by groupies, all eager to hear her hold court with stories of her adventures. 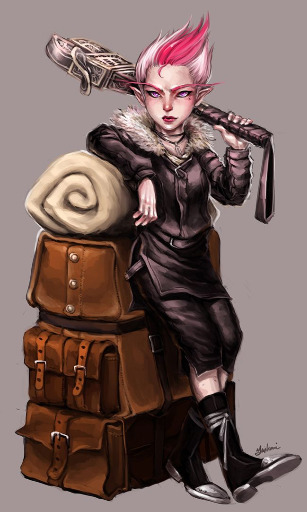 At her side is her butler, a taciturn dwarf monk named Astrid. 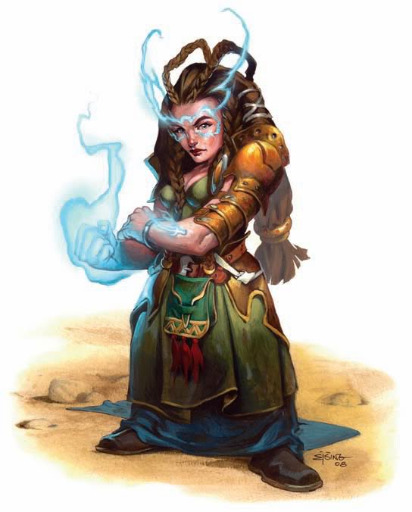 That night, there’s a crazy monster attack from hobgoblins, bugbears and goblins. The Unsworn leaps in to defend the Inn and ends up being a big help in the fight.

The result of your bravery is an invitation to join Moxie for a drink.  Here’s what you learn from the conversation:

Daisy makes contact with the gnome Murnon Wilrickle, Brigadier-General of the Huddlestoop Militia (the Stoopids) and, despite his high rank, talks him into permitting the Unsworn to cross the Traplands.

And so begins an arduous slog across the marshes.  There’s no sign of Gilburwort. Tumn is nervous about going to Purgatory but wants to learn more, so Dovienya reads and summarizes the Book of Lodope for him. Turns out that Tumn’s supernatural abilities revealed during the Blink Dogs’ tests point to him being a psychopomp – a guide of spirits to the afterlife.  Tumn blanches at that. He doesn’t really know what to do with that information.  What does it have to do with being the Shepherd Prince of prophecy?

Along the way, there are numerous groups of Qualican refugee families trying to flee the swamp. You soon discover why. 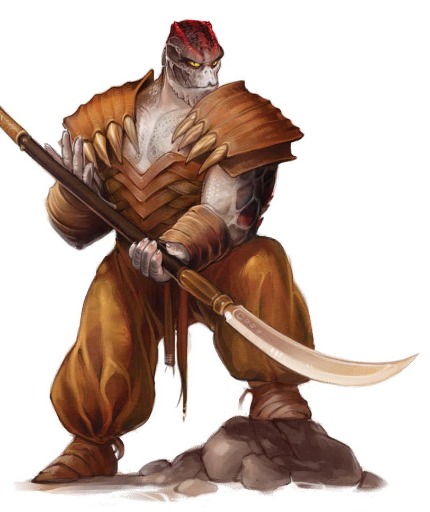 Investigating a burning village, you find it swarming with skeletal serpentfolk who are wantonly destroying everything around them.  After fighting them back, you assist the sole survivor who tells you that the ancient Ra’uda have awakened from their tomb and are now laying waste to all of Qualic. The description of the tomb does sound similar to Bloodboat’s. Could this be the same infection from Duriguin, aka the Sower?  And what does it mean that the tomb is emptied and its skeletons are now animated and possibly under someone’s control? Who is responsible? 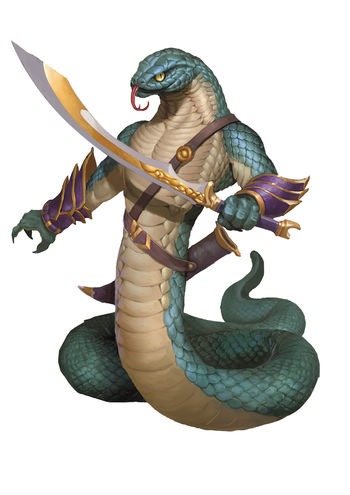 What the Ra’uda looked like before they were infected, went and entombed themselves, and woke up as animated skeletal minions

The Unsworn decides to take a detour from Tumn’s Quest and seek out the Tomb of the Ra’uda to investigate. 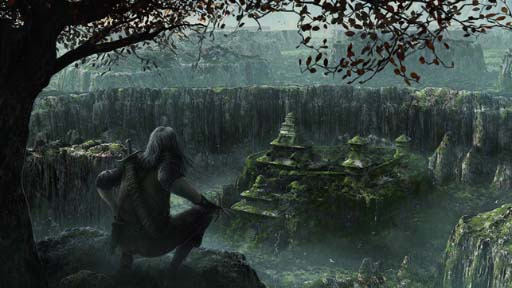 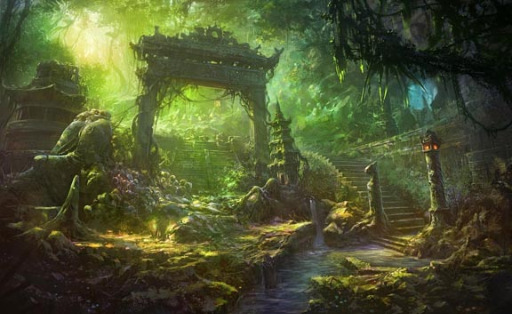 You find the tomb is being used as a makeshift base of operations by Cognail’s chief necromancer, Xysticus! – along with his goblinoid tribe minions and human apprentice Dederick.

Xysticus is in Qualic to test out the Ra’uda skullstone he’s embedded in a magical diadem to control the skeletal army. Looks like it’s been working!  Does this mean Cognail has plans to build a crown to contain all of the skullstones? That’s a whole lot of skeletal armies he can just make rise up and do stuff. And by ‘do stuff’, I mean take over the kingdom of Paradon by force!

You find evidence in Xysticus’ workshop that he was trying to find other infected kingdoms and their skullstones. You also learn from a bat-riding Lumpen-man message that the Sovereigns had invited him to join their ranks. The location of the residence of a top-ranking Sovereign, Absessa, is among the necromancer’s notes. 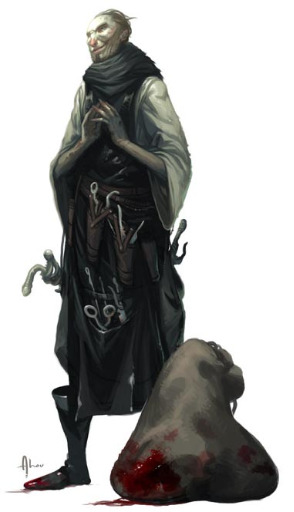 Xyst’s human apprentice, Dederick – notable only in that he kept a zombie possum as a familiar

With Xysticus and his minions dead, you grab the skullstone, gather up as much loot as you can from the tomb, and make your exit – only to find yourself surrounded by dozens  of official-looking Qualicans outside all aiming their javelins at you.

They accompany you to Sirsigi, the capital of Qualic – and usher you to the palace and throne room of the Qinnuqlar ruler, who Daisy recognizes as a member of the naga race. 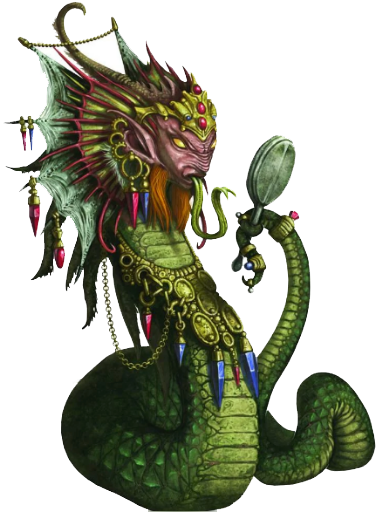 The naga wishes to thank you for defeating the undead menace.  For your service, you are each offered the chance to pick something from their prized Poison Gardens.  Everyone procures Gilburwort, except for Nim, who picks a bright blue-violet flower she saw in a dream.

Nim convinces the naga to cease their war with Paradon for now. Yay, the Unsworn just had a major impact on geopolitical forces!

And then the Unsworn continue on their merry way to the foot of the Brutal Mountains. There’s another Bregan shrine they can visit, plus the checkpoint of the Baublebeard dwarves to cross before they can make their ascent and enter Gwendols Gate, where Tumn must face his final test -be willingly sent to Purgatory where his destiny awaits him.