The hide-out’s security system turns out to be an uncaged chaos beast, which you dispatch with aplomb (props to Nim for the magic circle, Dov for the deft rapiering, & Daisy for successfully fortituding herself back into a solid state after getting liqui-cursed).  Dovienya then lockpicks the front door, which lobs the ball up, so to speak, so Daisy can spike it. She charges in on dog-back to knock the fleeing sentry out cold. 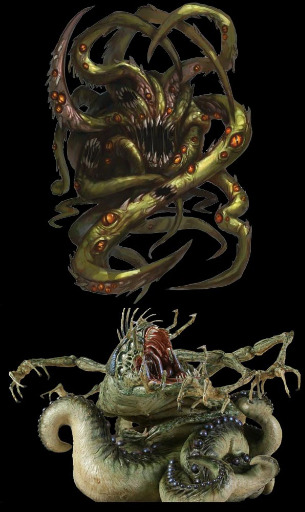 You are then able to sneak around the place unnoticed while the cultists in their chapel distract themselves with their unholy, psychedelic ritual. Dov is a trap/treasure finding machine, and you soon avoid all da trickz/collect all da lootz. 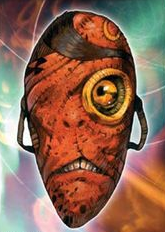 The cultists wear stylin’ bright orange robes and evil magic masks.  You think about donning them as a disguise (hey, the cliche is a cliche for good reason), but for the time being, you choose not to get all death star stormtrooper down in there. 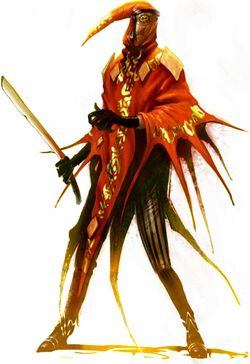 In one room off the dining area, you find a sullen demon (maybe a demon? you’re not 100%) sitting at a desk within a summoning circle, with stacks of parchment and writing implements in front of him.  He tells you he’s feeling a mite peckish.  Moumalid has been using an amulet to produce souls for the demon to eat in exchange for him writing something for him.  Apparently, the soul supply has run out recently, and the cult leader has resorted to feeding the demon small captured animals, which, according to the demon, is a lot like saying, “here have some salt.”  You don’t spend much time speaking with the demon, and honestly, no one can really blame you.

You also find some jail cells adjacent to the chapel where the chanting cultists are doin’ their thing.  Here you find two, still-living prisoners: 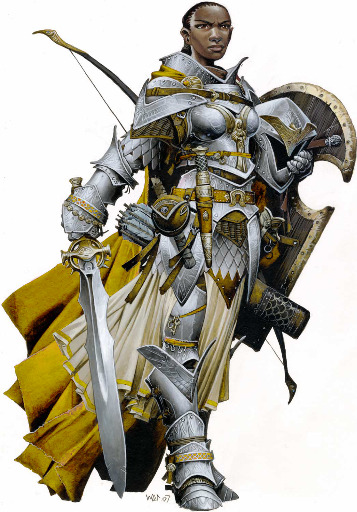 Dovienya recognizes a paladin of the Pure named Sa’ramae.  She’s in no shape to fight, but asks you to fetch her holy sword named Justifier from the chapel. It’s being used profanely in the cultists’ ritual and there’s some prohibitive anti-Law magic at work that makes it hard for her to retrieve it.  Once she gets her trusty “Justy” back, she invites you to join her in kicking some Caolaubist coat-tails. 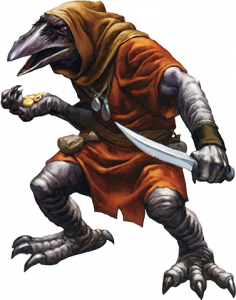 In another cell is a strange crow-person, the likes of which you’ve never seen.  There’s little time to converse, but you manage to parse out the following from its mutterings: