You’re back to eating another lavish breakfast the next morning when a frustrated Lady Averon enters the room unannounced to inform everyone that there’s been another supernatural theft. Last night, a relic belonging to the so-called “Star People” was taken.

Visibly put-out, your host explains this new development could fuel civil unrest. The devout visitors are so beloved by the commoners, it’s likely their victimization will garner much sympathy and misplaced anger. The Sovereigns run a tight ship here in Farglad and don’t want anyone to lose faith in the city’s abilities to handle this kind of problem. The Paradonian constabulary, officially called the Royal Guard but known colloquially as “cuffs” for the distinctive purple ones they wear, are looking into it, but you are free to check out the crime scene yourself.

Panther head symbol of Paradon, displayed on the cuffs of the Royal Guard

Averon tells you the theft happened at the Odeum, Farglad’s famous playhouse. The Starfolk had apparently lent the missing item to popular playwright Gotwinus to help him write his next magnum opus about them. Averon wants results and is giving you only a few more days before her hospitality ends and she chucks you out of the Fang.  That would mean: No more pancake breakfasts.

Heading out into the city later that morning, you decide to first make contact with the Whistler. In an abandoned warehouse, Dov wakes up a sleeping young man named Villik who says his job is to be a courier for the Whistler, taking messages to and from the mysterious fact-finder. Dov hands the teenager a copy of the auction invitation, a sack of 100 gold, and requests that the Whistler whistle his way to decoding the weird diagrams. Villik thinks the job can be done in a day.

Next on your itinerary is the Odeum. Dov deftly sneaks past two cuffs that are standing guard outside, while Nim and Daisy chat them up as a distraction.

Inside the theater, Dov interviews the venerable wordsmith Gotwinus, and learns that he cares little for the missing Luthan starknife. Rather, his pressing concern is his missing fox head amulet, which was stolen at the same time by the same perpetrator. He says it helps him with his writing. The possible implication is that it boosts his Charisma and/or Intelligence. Gotwinus is willing to pay a handsome sum to adventurers (who he has a particular fondness for) if they return the amulet to him. 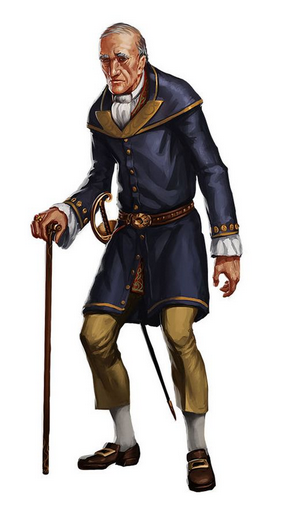 Dov examines the crime scene and finds a couple of clues that directly tie to the Chaos Cultists of Caolaub (!!!)

The game is afoot!

But then the game takes a misstep -actually a literal trip, when Dov blithely steps out of the theater in front of the two guards. They are immediately suspicious of a shady, previously unaccounted for person leaving the crime scene. They demand a search of Dov’s body in order to confirm he doesn’t have the missing items on him – a routine procedure, they explain. Dov declines the offer of a pat down, and successfully bluffs them into believing he’s a friend of Gotwinus’s, but then fails in his efforts to intimidate them into giving up their demands. They reach out to grab him, and Nim, in response, attempts a color spray spell on them, but the effect fails to stun them. Now the two cuffs know that Nim and Daisy are in cahoots with the shady cagey fellow. They pull out their weapons and blow whistles to alert other police. Daisy sideswipes their legs to trip them, and Dov takes off running. Nim and Daisy follow suit as the cuffs recover and begin to chase. Dov uses his local knowledge to lead everyone to a really good area to elude being apprehended. He blends into the crowd like a pro, and Nim and Daisy manage to stealthily act like they didn’t just attempt an attack on two cuffs and then fled the scene leading them on a merry chase.

Dov decides to spend of the rest of the day pursuing his lead about the Chaos Cults. He tells Nim and Daisy to wait for him at a tavern with a nice little outdoor patio. An hour goes by with no sign of their human friend, so the two decide to do their own sleuthing, asking around for more info about the so-called Star People (Luthans).

Dovienya loses track of time and lets four hours go by as he intently tracks the movements of the Cult in the city. The cultists leave religious nonsense text graffiti called Scrawlings in hidden spots to communicate with each other. Dov skillfully deduces the whereabouts of a suspected cultist named Milto who was recently released from prison. 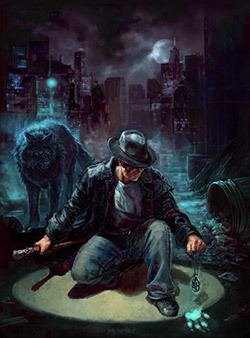 Meanwhile, Daisy and Nim learn that the Luthans are staying at one of the Temples of Calydo on highslope, but sometimes spend R&R time at a nice tavern nearby called the Hog’s Chalice.

With the Unsworn finally reunited, everyone heads back to the Fang for a night’s rest.

The next morning, you return to the warehouse to see if the Whistler has decoded the auction invitation. As you walk the streets of Farglad, you note the citizens’ preparations for tonight’s big event. This night is the new moon, and that means it’s Bright Night, the monthly holy festival where all Calydo’s light-towers are lit up to the brightest, and people celebrate the goddess’s triumph over darkness.

In the warehouse, Villik is back on shift (he likes a good tipper) and he tells you that the pictographs refer to a series of dates corresponding to this very week (!) Also, it’s funny – a Gridean wizard was just asking the Whistler about a document like it recently. Dov suspects he knows just who this Gridean wizard might be.

Next you seek out Milto, the suspected cultist, and interrogate him. 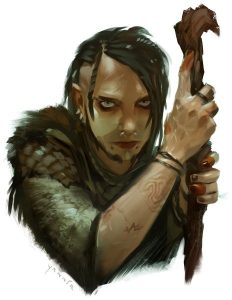 I turn my head and you may go where you want.
I turn it again, you will stay till you rot.
I have no face, but I live or die by my crooked teeth.

Nim heals Milto, which does seem to improve his overall demeanor. He looks into her eyes and asks pleadingly , “Who am I?” She can sense that there is a magical curse about him, and something needs to be done to lift it.

Daisy realizes what he’s been saying sounds like a riddle. After some thought, the solution comes to Nim in a flash. She looks back at Milto and tells him who he is: a key.

With that, the curse is lifted from his mind and he regains his sanity. The guy’s still a crazy murderous cultist, so I mean, “sanity” is relative. Milto, realizing that tonight is Bright Night, tells you he must go to the hide-out as the cultists have their own unholy version of a worship service that they do. He gets up and heads out, caring little whether you follow or not.

You realize that this may be an opportune time to pay a visit to the Chaos Cult of Caolaub as, according to Milto, they will be in various stages of trance and religious ecstasy tonight, so, in other words, maybe more distracted than usual?

You follow Milto deep into the city. He eventually takes you underground, into a kind of cave system. Eventually you arrive in a small tunnel that leads up to a heavily locked door. You think Milto has already gone up ahead and gone inside.